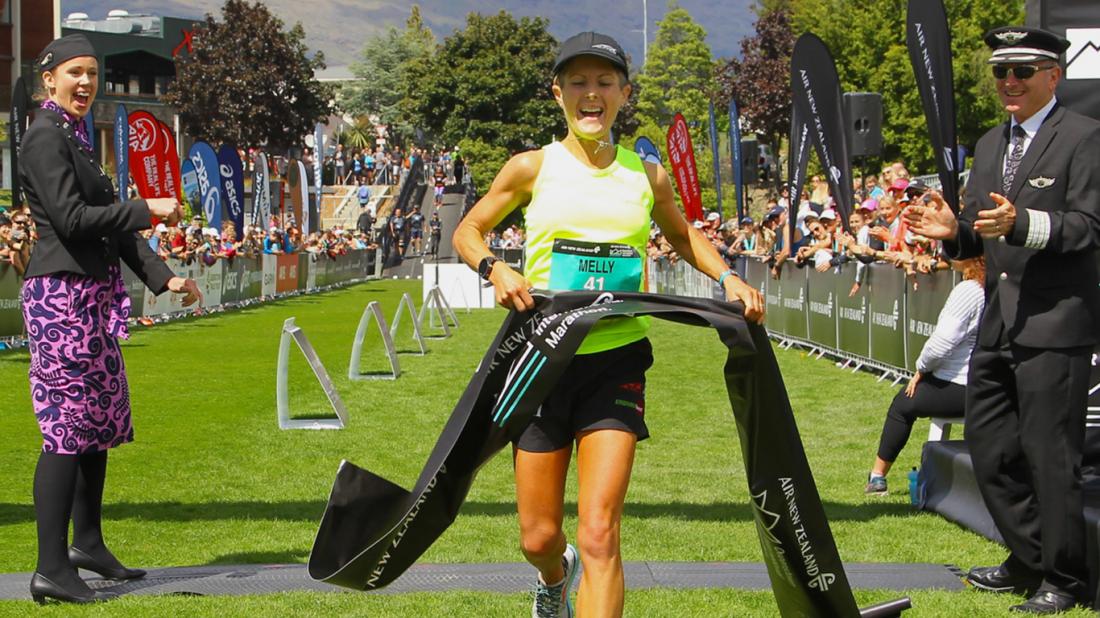 Mel Aitken returns to a happy hunting ground this weekend as the West Coast runner lines up to defend her Air New Zealand Queenstown International Marathon title, but will do so in the face of fierce opposition in the fourth running of the already iconic event.

Aitken (West Coast) broke through last year for a first victory after a number of close misses, and has again been juggling a busy work life and some unwanted injuries, but despite that feels in great form ahead of Saturday.

“I’m in much better form than I was last year. I’ve had an interesting season, injury set me back a bit with stress fractures in my foot, but in saying that I’ve also posted a personal best marathon time on the Gold Coast in July, so I think I am going into this year’s event a lot stronger than I was last year.”

Aitken is staying focused on performance, rather than a result based outcome.

“I want to get a Queenstown personal best. It is my fourth time running the course, so I’d like to do my best time, that’s the extent of my aspirations.”

The West Coast Police Area Commander is not even sure what might represent a good time on Saturday, with the infamous ‘marathon hill’ removed from the course now that repairs are complete to the Kawarau River trail.

“It’s hard to say if there is a key section on the course, the course is quite varied in terrain and nature and I guess it will depend who I am running with. I haven’t seen the starting lineup yet, so deciding if I go for it or not might depend on who is around at the time. It will be interesting now that the hills near the end have been removed, whether that will result in slightly better times, it will be interesting to see.”

Looking to make it back to back marathon wins after impressing in her victory at the recent ASB Auckland Marathon, Hannah Oldroyd is again going in without any lofty expectations in Queenstown.

“My approach will be the same as usual, I will set off at my own pace and see how the race unfolds, the legs are fine, this will actually be my tenth event since Auckland. We moved up from Christchurch and there weren’t really that many events on, back in the UK we used to run two or three times a week so up here we are just running whenever we can.”

Oldroyd moved out from the UK within the last 12 months, with Queenstown a race that was quickly and often recommended as one to do for the self-confessed ‘racing junkie’.

“We have been there (Queenstown) once, I did the Southern Lakes Half Marathon in Wanaka earlier this year. Everyone has recommended I do this race though, and now they have removed the hill, that is a bonus. We intended to race before we moved up north from Christchurch. The big goal will be to get there early enough to enjoy a Guinness before the race, and then a few more afterwards!”

Elina Ussher will be an interesting one to watch, predicting a sub 3-hour time, the multisport star is using the event as part of her preparation for another tilt at the Coast to Coast next February, but will be giving it her best shot on Saturday.

“It is quite new for me, I have done a few marathon’s as part of adventure or multisport races, but running one as a standalone marathon is quite exciting and new for me. It is part of my build up to Coast to Coast, this is great to help me with a running focus and give me more motivation to work on my running technique.”

“I always want to do my very best, but I am aware there will be fast girls running the race on Saturday, I am just wanting to give my very best and see how it goes. I really enjoy the training and still have a great opportunity to be a professional athlete, so I don’t find it a struggle, you always have your hard days, but in general I am still enjoying it for sure.”

Ussher won’t be shy of helpful tips about how to handle the course, husband Richard knows the terrain well after finishing second in the men’s race last year, and will this year be riding the lead mountain bike at the head of the NZ Sotheby’s International Realty First Half Marathon women’s field.

The Air New Zealand Marathon gets underway at 8:20am on The Avenue at Millbrook Resort, with the first women finishers expected down the finishing runway into Queenstown Memorial Recreation Ground at approximately 11:10am.