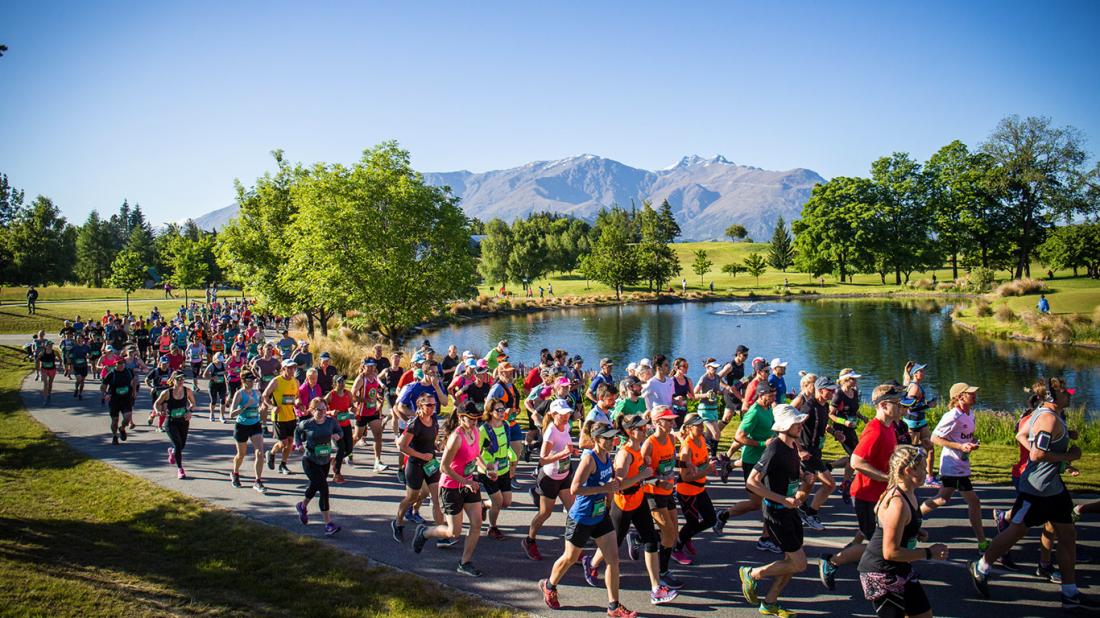 The Timaru athlete loved the conditions and the support of thousands lining the street and the trails of a course that took runners from Millbrook Resort in Arrowtown, to the finish line in the heart of Queenstown.

“This is absolutely beautiful, and I love the warm conditions, I love racing in the heat. The final 10km was amazing, the support from the big crowds and the half marathon finishers along the way was brilliant.”

Despite the apparent ease of the win and a new race record, Wreford almost didn’t make the start line at Millbrook Resort.

“I have been battling a little bit today with a touch of the flu, and yesterday I was still marginal about running. I have an ear infection so found it tough hearing, but managed to stay healthy enough to be on the start line.”

McWhirter backed up his third place at the recent ASB Auckland Marathon with a runner-up finish today, while local runner Jason Hall (Queenstown) edged Francisco Sanzana (Chile) in a dramatic sprint for the final place on the podium.

Hannah Oldroyd made it back-to-back major women’s marathon titles, just three weeks after taking out the ASB Auckland Marathon, the British runner took the lead inside the final 10km and proved too strong, with defending champion Mel Aitken also going under the previous race record in second place.

Oldroyd was quick to label it her favourite marathon course and is already planning on defending her title next year.

“I love to race, I hate running, but I love to race! I loved the course, it was absolutely beautiful, and I will definitely be back. The first half I was taking it nice and easy and the views were stunning and then I loved the trails around the lake, I wasn’t sure where I was at times, but it was amazing.

“That is the tenth event for me since Auckland I ran with friends a couple of times this week, I just love it and while you can, why not race everything.”

Oldroyd won’t have much time to be a tourist, but was keen for her traditional post-race hydration.

“We will have a quick look around today and tomorrow, we have to be back in Christchurch tomorrow night, but we will make the most of it, so long as we have time to get a Guinness in all will be well in the world!”

Mel Aitken was delighted with her time and another appearance on the podium.

“It just felt good all along, there was no wind and while it is bright sunshine, it wasn’t hothot. I took five minutes off my time from last year, so it was just awesome. I never saw Hannah until 9k to the finish, she was on my shoulder and then ran away to the finish and did a great job.”

Air New Zealand Chief Revenue Officer Cam Wallace says, “It’s terrific so many people have taken part in today’s marathon from across New Zealand and around the world, with 90% of entrants travelling from outside Central Otago to compete.”

“We’re delighted to have helped bring this fantastic event back to Queenstown for a fourth year and I’d like to congratulate the 9,825 people who’ve taken part.”

Daniel Balchin (Christchurch) and Josie Wilcox simply ran away from their opposition in the New Zealand Sotheby’s International Realty Half Marathon, Balchin winning the men’s race in 1:07:28 and Wilcox the women’s in 1:19:28, in the process also setting course record times in the near perfect running conditions.

Balchin has gone as low as 65 minutes for the half distance, but described what was for him an ‘easy’ day in perfect conditions.

“It is absolutely beautiful, a cracker of a day. The plan was to sit in and see how I was feeling and then I just went off on my own and ran at my own pace. It was about 3km into the race I made a burst and I just didn’t see them after that.”

“I am feeling really good, I loved that today. It started conservatively until about 3 or 4k and I was finding the pace too slow, so I took off, as soon as we hit the limestone path I went for it. The crowd and the course were awesome, I really love the course. I would love a few more hills in it, I have been doing plenty of cycling lately. I haven’t been running that much so I am really happy.”

Another to set a new mark on the day was Dominic Channon, lowering the 10km men’s race record by exactly one minute to 33:28 while the women’s 10km event was taken out by Karin Schank in 39:02.

Race Director Nicole Fairweather was delighted with a picture postcard day that will leave a lasting imprint on all 9,825 runners, but more especially the 1,830 overseas entrants and their families.

“What a wonderful showcase this has been for the Queenstown Lakes District, again putting Queenstown on the map as a holiday destination of choice for people all around New Zealand, and all around the world.

“The images, memories and the stories that will be seen and told the world over will be those of fantastic achievements on a magnificent day with Queenstown shown off in all her beauty.

“This event is not possible without the support of that community, and we have to thank 520 dedicated and passionate volunteers for being such wonderful ambassadors for the event and for their home town. $18,000 is going back into the community thanks to their efforts.”

Air NZ Marathon organisers also made a donation of $40,000 to official charity Queenstown Trails Trust, with a portion of entry fees and further donations going to maintain the upkeep of the trails that locals and visitors alike enjoy year-round in the Queenstown Lakes District.

The talk is already turning to next year’s fifth year anniversary event on 17 November 2018, with organisers promising more innovation and updates. Entries go on sale on the event website tomorrow (Sunday November 19) at 9am.